New Research Document Released
​In 2019 Oranga Tamariki and Family Help Trust decided research was needed to ensure the families referred by Oranga Tamariki to take part in our intensive intervention programme were receiving the support they needed to succeed.

Click the link below to read the report.
Oranga Tamariki and Family Help Trust Research 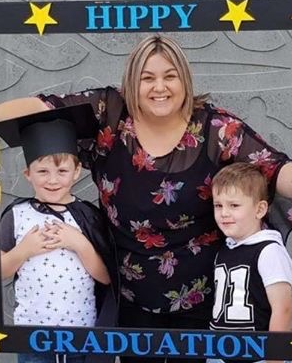 We're Celebrating our HIPPY Families
From Bridget Swan HIPPY Aranui Co-ordinator
Alysha was a very shy person, who lacked self-confidence, when she first started on the HIPPY programme.  She became a tutor and although I and the families she worked with found her to be very good in the role of tutor she felt that she did not have any skills. Throughout her time as tutor her dream was to come off the benefit and to be able to support herself and her children.
She finished her role last year and has now gained her full license and a job that I believe was written for her.  She is a self-confident and knowledgeable woman, who is now in a role that will continue her growth and knowledge.  She is accepting responsibility and is often the leader of her co -workers.

Alysha's Story
My son Max and I started our HIPPY journey in 2017 when I enrolled him on the programme. A few months into it, Bridget asked if I would like to become a tutor, the thought of this made me really excited but also very nervous as I had not worked in this line of work before and I also lacked a lot of self-confidence, but I decided this was an opportunity not to be missed. I enjoyed working as a tutor so much, watching whanau and tamariki learn and bond together was amazing and made my job so worthwhile! During my time with HIPPY I grew so much in confidence, with the help of my coordinator and the professional development we received. Bridget was so supportive and believed in me so much that it I started to believe in myself also, she even attended an assertiveness and self-confidence course for women with me which I was so thankful for. In December my HIPPY journey came to an end, I was very sad to be leaving but I knew I was going away with so much more then what I had when I started, and with that confidence and knowledge I knew I could do anything I put my mind to! In April I decided to apply for a job through Plunket, and I got it!!! I am now a Kaitiaki working alongside Early Childhood teachers to ensure whanau and tamariki’s wellbeing and needs are being met by being a navigator to different services that can help. I am so excited about this new adventure and believe if I had never become a tutor I would never have applied for this amazing job!

Haku’s Story
Haku is Japanese and English is his second language, he spoke very little English when he was first enrolled.  His mother had very high expectations of him and was continually concerned that he was not colouring in the lines, staying on the path or writing his name.  The tutor has worked very closely with mum and as a result mum has developed a knowledge of child development and her expectations are more realistic. Haku can now write his name in Japanese and English and has grown in confidence in his own abilities.
Haku’s Mother Says
Haku has made a book 'I can' (HIPPY activity).  He loved it and wanted to take it to school. He showed it to teachers, and they let him to read it to other kids at story time.  The teacher said he was very confident. I was proud of him. If we hadn't worked with HIPPY, he definitely would not have had a chance to read to a large audience. I'm very proud, and want to say thank you to you, Emma and HIPPY